“What it felt like”: Memory and the Sensations of War in Vergil’s Aeneid and Kevin Powers’ The Yellow Birds

The Nisus and Euryalus episode in the ninth book of Vergil’s Aeneid and Kevin Powers’ 2012 novel The Yellow Birds on a soldier’s experiences in the year 2004 during the American War in Iraq are both constructed around a very similar story pattern of two friends who go to war together and are faced with bloodlust, cruelty, death, mutilation, and the duties of friendship, as well as the grief and silencing of a bereft mother. While the narrative and commemorative background of the two texts is very different – including the sense of an anchoring in tradition, the role of memory, even the existence of a coherent plotline itself – both the Augustan epic and the modern novel employ strikingly similar techniques and sensory imagery in their bid to convey the fundamental experience of warfare and of “what it felt like” as vividly as possible. 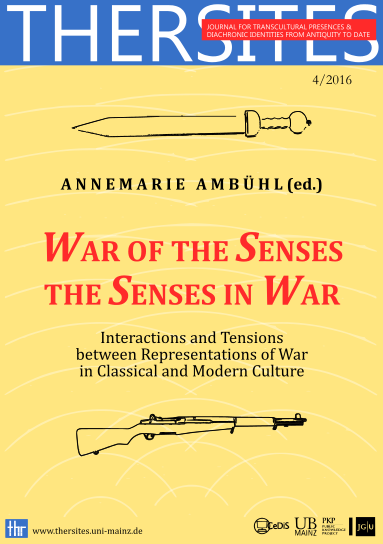 Published
2017-04-14
Issue
Vol. 4 (2016): War of the Senses – The Senses in War Interactions and Tensions between Representations of War in Classical and Modern Culture
Section
Kriegsdarstellungen aus dem 21. Jahrhundert in verschiedenen Medien